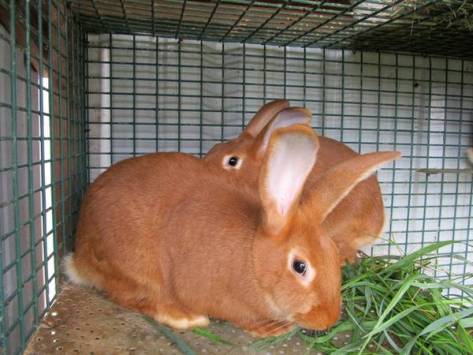 These little guys are sorely tempting me right now. A breeder in Oregon is offering up pedigreed New Zealand Reds and New Zealand Blacks, both of which I want to raise one day, but right now a breeding pair of reds is what I really want. Said breeder will be on the Olympic Peninsula on the Thanksgiving holiday weekend, which is not too far to drive (well, four hours there and four hours back, not too bad if we go down the night before and stay in a hotel).

It would bring a completely different blood line into the rabbitry, I’d have three for the diversity, and I could also breed reds and whites together for broken reds. If I bred them with any of the S bunnies (Starbuck, Sweetie Belle, and Serenity), the kits would be fully pedigreed. If I put them in the outside rabbit hutches I’d have room enough. They’d have to be outside anyway for quarantine for a month.

What I should be is patient and stop looking at rabbits on craigslist. I saw some American Blues there, too. Fortunately they were not my favored color of the three shades of blues so much easier to resist.

The little kit is still alive and growing, though at such a reduced rate compared to his siblings. Today we tried keeping Piper in more of an upright position and put the baby into more of an upside down position, more like how they would be during a natural nursing. It seemed to help. The baby didn’t root around near as much as before. He sure is an active little guy compared to how he was when we first discovered he wasn’t eating enough. I just wish it were a bit more obvious that he is growing. I suppose I could try weighing him daily to convince myself. Once I can’t see the ribcage I will feel better. He is getting milk belly so I can tell he is eating and he is staying pink and white not grey. I just wonder if he’ll ever get to a normal size or if his growth was permanently stunted by missing out on a few early meals.

All of the other kits from both litters are thriving. Sweetie Belle is doing a great job her first time out. And she is so friendly now. Protective, but good-tempered. It’s like she’s a completely different rabbit.

Things are going well on the chicken front. Egg count is up to six a day. Wind season has begun so I have to remember to prop the door of the duck den open, which is where their food trough is now. If I don’t prop it open the wind will blow it shut and then they won’t have access to their feed all day.

We did not end up slaughtering rabbits yesterday. The handyman called and said the new kitchen window had come in and so they came over and put it in. They were doing a lot of work outside with loud tools and of course smoking like chimneys. Mom won’t tell them not to smoke on the property even though she hates smoking as much as I do. I didn’t want to have to breathe that while working and I didn’t want the rabbits upset by the noise of the saw. This window is not the same size as the old one, but it is a far better window. The frame had to be rebuilt. It’s not quite done, will probably be finished tonight, so we decided to just wait until next weekend.

The meat we bought on Saturday is thawed now, so I will be able to can the beef today after my appointment with the sleep doctor. And I really need to get cracking on the next batch of pickles or I’ll have cucumber soup, not crisp pickles. I think the stove top is big enough to have both the water bath canner and the pressure canner on it at the same time. The pickles won’t take long at all. Water bath canning is fast and easy. The meat will take 90 minutes after it gets up to temp and probably another 30 to depressurize. Fortunately I have plenty to read.

I finished the first book, Living with Pigs, and am partway into Storey’s Guide to Raising Pigs. It seems like something we could probably do. I ran across a website called Farmstead Meatsmiths for a group based out of Vashon Island and after watching this video http://vimeo.com/39451071 it seems even more doable. They will come and teach you how to do it, very hands on, and you can even turn it into a class for others as well and get a discount, but even without the discount it would be worth it to learn from people who really know what they are doing.

Pigs are still quite a ways in the future, but it’s nice to know that when we are ready, a place like this exists.

Our house had a showing on Saturday and apparently our house is the front runner in what these people have looked at so far. Still refuse to get my hopes up, it’s only been listed for 2 weeks, but it’s nice to know the buyers were very impressed by it. Heck, we’d move back into it if it was on acreage and not in an HOA in a neighborhood where my daughter’s friend was killed. Sometimes I wish we could just pick up the house and plop it on a different property.

Oh, well, that’s not possible and we have to work with what we’ve got.

17 thoughts on “Temptation, Thy Name is New Zealand Reds”

Cooking with a Wallflower
Zero-Waste Chef

No packaging. Nothing processed. No waste.

This WordPress.com site is the bee's knees

Living the dream...or perhaps the nightmare

Celia Eboracum
The Self Sufficient HomeAcre
Our Old Island Home

Our plans and journey from suburban life to rural living with self sufficiency.

A Girl & Her Chickens

A dive into all things feathered and farming...

We are a family built on the foundation of God in the belief of a strong community of like minded people.

Learning who I am in Christ

Self sufficency, dignity and security.

Homemade with Mess
Fields of Bramble

Simple Living and Faith Working Together

Year round aquaponics for home food growers in cold climates

ON ONLY THREE ACRES, WITH LITTLE TO NO MONEY

A Journey of homesteading our life, marriage, children, being crunchy and living in Colorado (Eastern Plains)

Our Life Dreaming, Learning, and Exploring.

Our journey towards being self-sufficient.

The greatest WordPress.com site in all the land!

mischief, maddness and other news from Tottys Bend Farm

One girl's attempt to build a fund of knowledge, skills and wealth for her future farm

Do It Your Damn Self

A Year Of Making Everything We Can and Not Buying It.

The humor and humility of trying to leave a kinder footprint.

A little homesteading, a little romance, and a whole lotta crazy!

Looking forward to the future, living in the present. - Grace Alice

From a scrappy 1/4 acre to a homestead on more! Livestock, gardening, meat, wool, eggs, dairy, DIY projects, and life from scratch.

Slowly regaining self-sufficiency, one mistake at a time.

Homesteading Skills and Building a Life in the Country

Join our family in our journey of homesteading

Self Sufficient, Self Reliant and Prepared

Living on a little and making the most of it

The further adventures of a one-time farmer